The History of Ubuntu (Linux)

Ubuntu Linux is one of a number of different flavors of the Linux operating system. The various different brands of Linux are generally known as Linux Distributions (usually shortened to Linux Distros by Linux experts). In terms of the history of Linux, Ubuntu is something of a newcomer. In the relatively short period of time that it has been available, however, Ubuntu has rapidly gained the respect of both experienced and novice Linux users throughout the world. END_OF_DOCUMENT_TOKEN_TO_BE_REPLACED

Posted by fahmirahman on January 11, 2011 in Linux

A leaked trailer has been making the rounds that confirms the earlier posts from the Playstation blog that point to the PS3’s 3-D capabilities.  The trailer shows what appear to be scientists monitoring a man as he plays a first person shooter while wearing a set of “Real D” 3-D glasses.  Suddenly the image begins to be too much for the man, as he yanks off the glasses.  A grimace on his face turns to a smile as the word “PS4” appears on the screen.  Here the video: END_OF_DOCUMENT_TOKEN_TO_BE_REPLACED

At Research In Motion’s annual BlackBerry Developer Conference, CEO Mike Lazaridis announced the company’s new tablet — the PlayBook. The tablet will utilize an OS created by the recently acquiredQNX (just as we’d heard previous to the announcement) called the BlackBerry Tablet OS which will offer full OpenGL and POSIX support alongside web standards such as HTML5 (which is all tied into RIM’s newWebWorks SDK). Lazaridis was joined on stage by the company’s founder, Dan Dodge, who said that “QNX is going to enable things that you have never seen before,” and added that the PlayBook would be “an incredible gaming platform for publishers and the players.” RIM also touted the PlayBook’s ability to handle Flash content via Flash 10.1, as well as Adobe AIR apps. The new slate — which Lazaridis described as “the first professional tablet” — will sport a 7-inch, 1024 x 600, capacitive multitouch display, a Cortex A9-based, dual-core 1GHz CPU (the company calls it the “fastest tablet ever”), 1GB of RAM, and a 3 megapixel front-facing camera along with a 5 megapixel rear lens (and yes, there will be video conferencing). There was no mention of onboard storage capacity during the keynote, though the devices we just spied in our eyes-on post are labeled 16GB and 32GB on their back panels. The PlayBook will be capable of 1080p HD video, and comes equipped with an HDMI port as well as a microUSB jack, 802.11a/b/g/n WiFi, and Bluetooth 2.1. The device clocks in at a svelte 5.1- by 7.6-inches, is only 0.4-inches thick, and weighs just 400g (or about 0.9 pounds). END_OF_DOCUMENT_TOKEN_TO_BE_REPLACED

A pair of Apple’s competitors in the smartphone market haven’t forgotten that not all Mac users use the iPhone as their mobile phone, as both Research in Motion and Microsoft this week pushed out updates to their Mac OS X software that allows users of the companies’ smartphones to sync to their Macs. 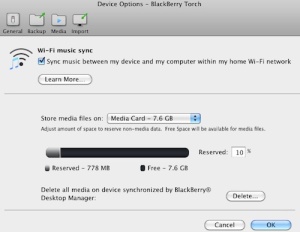 Research in Motion on Wednesday announced the release of BlackBerry Desktop Software 2.0 for Mac OS X, bringing support for several new features, the most substantial of which is Wi-Fi syncing. The feature allows users to wirelessly sync music between their BlackBerry and their Mac when connected to the same Wi-Fi network, a feature many iPhone users have been hoping to see added to iTunes. END_OF_DOCUMENT_TOKEN_TO_BE_REPLACED

Digg founder Kevin Rose today noted that he has received information from a reliable source indicating that Apple will announce the second-generation iPad within the next 3-4 weeks, possibly on February 1st. END_OF_DOCUMENT_TOKEN_TO_BE_REPLACED

Its seems these days that Facebook is hotter than ever. “The Social Network,” based on its origin, snagged the best picture prize this weekend from the National Society of Film Critics.